The number of cybersecurity start-ups in the UK remains high, however the number of newcomers to the scene has fallen in the past year, according to a new study. The vast majority reside in London, while they remain at an average headcount of 10 or fewer members, amid a tightening human capital market.

Cybersecurity remains a fast-evolving ecosystem that presents new threats to enterprises every day with hackers becoming increasingly innovative in their attempts to break into corporate networks and steal valuable data. As such, cybersecurity start-ups are playing an even more critical role in providing disruptive and innovative solutions to novel cybersecurity challenges. In order to help keep track of the innovative new industry, consulting firm Wavestone created the 2018 UK cybersecurity start-up radar, in order to capture this environment.

The first edition of the Wavestone report analysed a total of 158 cybersecurity start-ups, and found that there is a strong variety among start-ups in cybersecurity when it comes to their area of specialisation. At the same time, firms are largely staffed by young professionals, and are heavily London-based. Interestingly, the number of start-ups emerging in the sector seems to have slowed in the past three years, despite the demand for cybersecurity services having risen steeply in that time. 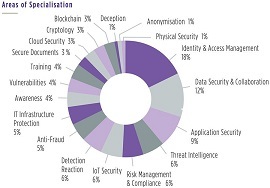 According to the research, Identity & Access Management and Data Security & Collaboration are the two largest areas of specialism, though Wavestone also issued a note here that these are two of the broadest categories they devised to measure the market. Conversely, the least represented areas were Physical Security, Anonymisation and Deception, each scoring 1%. The narrow margin between each category suggests that overall, UK cybersecurity start-ups are well-spread out, indicating a healthy market with a wide range of cybersecurity topics drawing entrepreneurial interest.

Meanwhile, to gauge a further sense of maturity regarding the cybersecurity market, Wavestone looked at both founding year and the number of employees. The majority of British start-ups still have 10 employees or less (62%), having been founded in the last 4 years and subsequently taking time to grow their headcount. This may be because the market has neared its maximum saturation point as a growing number of firms have come to compete for a small pool of talent.

This would be supported by the further finding that from Wavestone’s sample, 28% were founded in 2015, with slightly more of the remaining population being established post-2015. In the last year, however, the number of new start-ups has fallen. This could be because there is now limited space for new competitors to take off, or, Wavestone note, because their solutions are not mature enough to be visible in the market yet. Unsurprisingly, the 4 start-ups founded this year all have less than 10 employees each. 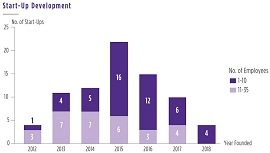 At the same time, the heightened level of start-ups tend to focus on a small part of the UK. While the focus on these hubs means start-ups have access to the world’s market more easily, again it limits their access to talent. 65% are London-based, which the researchers believe is explained by the growing demand from the UK’s financial services sector to secure their IT systems in the wake of several cyber-attacks over the last 3 years.

Commenting on the results, authors Florian Pouchet and James Willcox said, “The overall UK start-up landscape is booming, and the UK is certainly a European hub for cybersecurity start-ups to establish themselves. We found that a large number of them came from abroad to set-up in the UK, from far-and-wide locations such as Hong Kong, Israel and the US.”